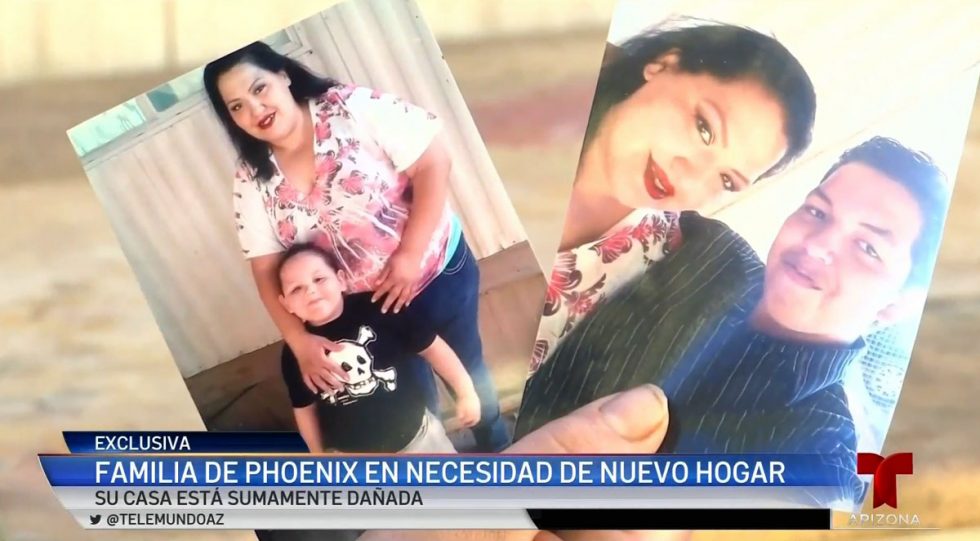 In the Community / Social Media

Juliana was hoping for a miracle this Christmas. Last year was especially difficult for this disabled mother and her three children. Their neighborhood looks a bit rough at first glance, and the mobile home they live in is desperately in need of repair. The inside of the home tells an even darker story.

In mid-September, Juliana had admitted herself to the hospital after stepping on a sharp piece of glass. It had broken off in her right foot and quickly became infected. With diabetes compounding the problem she had to undergo invasive surgery to prevent the loss of her foot. After three long months in the hospital, Juliana’s growing medical bills have continued to make her situation even more desperate.

“I had heard about her story, and the team and I went right over to check out the situation and see how we could help,” says Martha Llamas of M&R, INC., a Phoenix-area commercial cleaning company. “I’m partnered with an amazing group of women from an organization called “De Mujer a Mujer.” It was founded by Irma Orozco and Naye Olvera. We get involved, do what we can to assist families who need help in the Valley, and get things done! After leaning about Juliana’s circumstances, we decided to adopt her family. The first step was to make a task list and begin to rally a compassionate team of volunteers.”

Upon inspection of Juliana’s home, the picture became clear. Carefully stepping over growing mounds of garbage, it was easy to spot the large holes in both the floors and the ceiling. The dripping sound of water indicated a problem with the plumbing. The old pipes in the home had become clogged, and the low water pressure wasn’t strong enough for cleaning or bathing easily. The utility company was ready to shut off the electricity, and the landlord had issued a seven-day eviction notice. A rustling, paper-like sound was a sure sign of cockroaches.

“I was very ashamed of my humiliating situation,” said Juliana. “I’m a single mother with no job and three children, one with a mental disability.” Issues were already compounded by the COVID-19 global pandemic. Finding work now was even more difficult for her because healing from the foot injury requires Juliana to be in a wheelchair.

Araceli Duarte, a senior member of De Mujer a Mujer, comments, “It took us hours to clean up. We started with a patio roof that had collapsed  the night before. Really, no human beings should have to live in these conditions. Telemundo Arizona sent a team out and did a news story to try and inform the public about what is still needed here.”

A link to the Telemundo news segment is here.

Progress has already been made, but the goal is to provide Juliana and her family a modest new, handicap accessible manufactured home. Repairs to the existing structure will continue as funds are raised to improve living conditions for her and the kids.

If you would like to help the family in any way, please contact De Mujer a Mujer via their Facebook page, or email us at Empowered@MarthaLlamas.com for more information.